Aoyama Kitamachi social housing is a building complex in central Tokyo, Japan build in around 1960s. Completely different structure from the surrounding urban pattern created a unique symbioses between modernist style of solid concrete building blocks and sensitive Japanese way of making home-like small scale urban environment. On the green wast spaces – semi public open spaces, generally belonging to no-one, low income people started to take care and created a spontaneous community gardens.
Aoyama social housing is a complex of several building nowadays under the demolishion because of its location in central Tokyo. The area is surrounded by the richest and most commercial neighbourhoods and becomes ‘inefficient’ nowadays. But also there are many other problems in the old structure of buildings such as low earthquake and fire protection.
The aim of the project is to provide a possible solution including all aspects, either the social and the commercial.

Inversion
While thinking about the dense structure of neigberhood, where mostly small 3-4 story houses are separately packed on tiny plots, my thoughts were to take the current pattern of the surrounding area and make an inversion of the urban structure. As the streets become a one continuous house and the houses become voids or rooms of the house – community gardens and open spaces.

Gradient
I am using the inversion not only in the nature of the solid-void context but also the inversion of strict private or public nature of the space. Turning black&white in the plans (private&public) into a grey colour in order to gain the semi public and semi private spaces, spaces so obvious and natural in Japanese environment.
The white colour of public space is gradually going into the black colour of private flats while having several shades of grey.

Circulation&hierarchy
Main street crossing the plot in half is preserved in order to connect the two strategic streets Aoyama Dori and a smaller shopping street for locals. It also servers as a corridor for people who want to just pass through. The second, crossing street id connecting more local areas with the plot and serves more for people living there.
The hierarchy of the space is led by the main public street – to the sides of the plot, the nature of the open space is more private.

Program and public space
In general, the place should be various and include either the demand of commercial shops, working places, education and culture as well as the demand of the housing. According to the hierarchy of the publicity, the most public program is distributed along the main street. It goes along all the streets or rather public rooms.
The hierarchy in vertical is always the same – either for the border line with public amenities, or the inner housing courtyard – the first floor is public ( in case of shops, workshops etc) or shared (in case of housing).
The long street crossing the whole plot is rather a series of public rooms, every room has different program. There is also a community local centre with program for locals on the crossing of the street.

The design of the building goes in the logic of the hierarchy and gradient.
To show this concept I choose part with public space as well as the community gardens. The 5 pictures should show the different atmosphere of each place – from public to the most private.
As mentioned above, the vertical division correspond to the hierarchy of publicity – on the first floor there are spaces either for public purpose or for the purpose of people living in the building – shared kitchen, laundry, workshop, study rooms or whole garden.

The gradient as the main concept is visible on all of the stages of design.
White colour represents the main public spaces such as main plaza or shopping street. While going deeper to the into the plot you meet the smaller, light grey public spaces such as gallery plaza. The medium grey, semi public space is the shared garden for people living in each building. Going upstairs, you enter the apartment through the dark grey, semi private terrace used by people living on the same floor. And finally, entering the black colour, private apartment through the living room into the most private bedroom and bathroom. 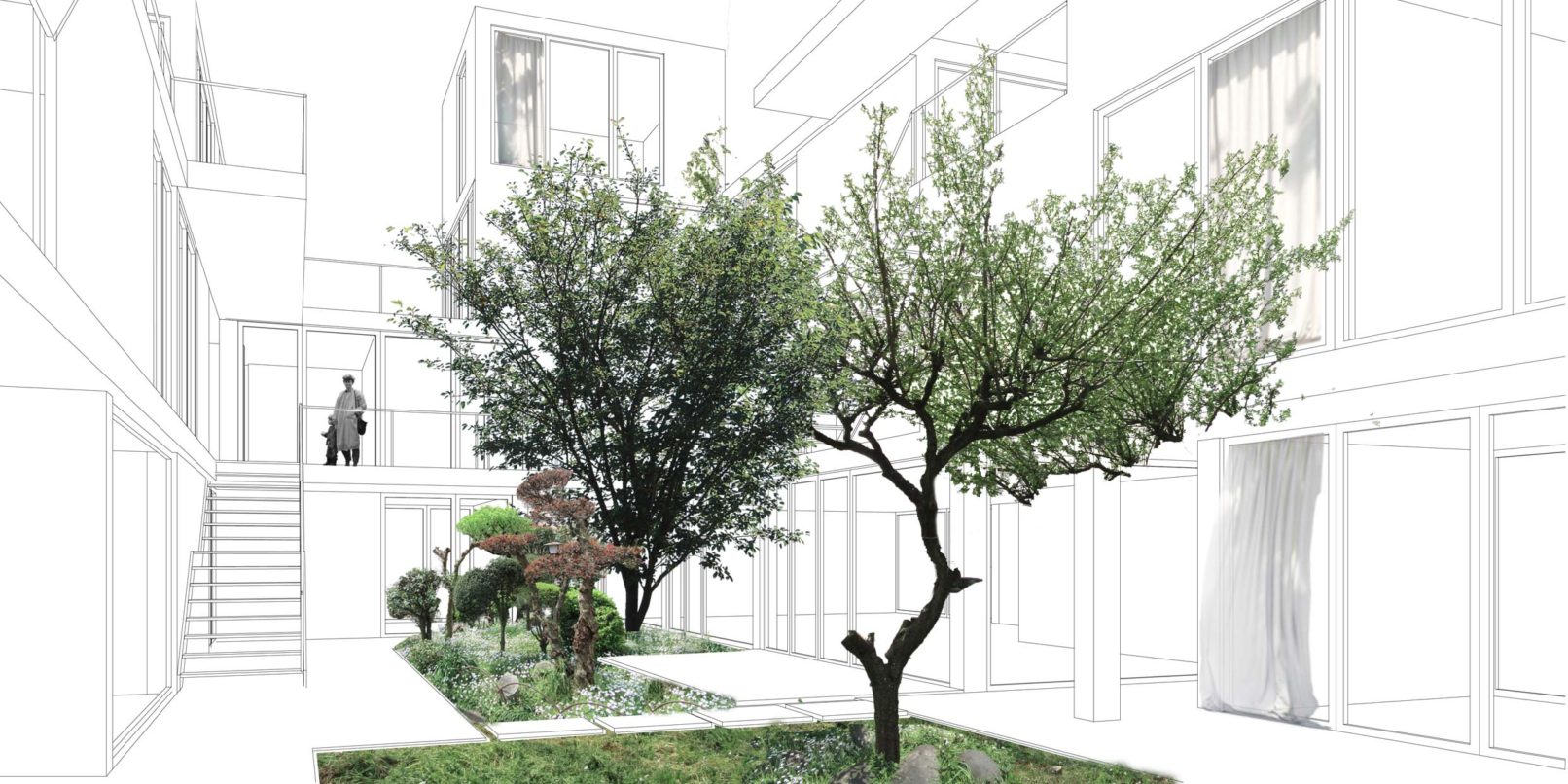 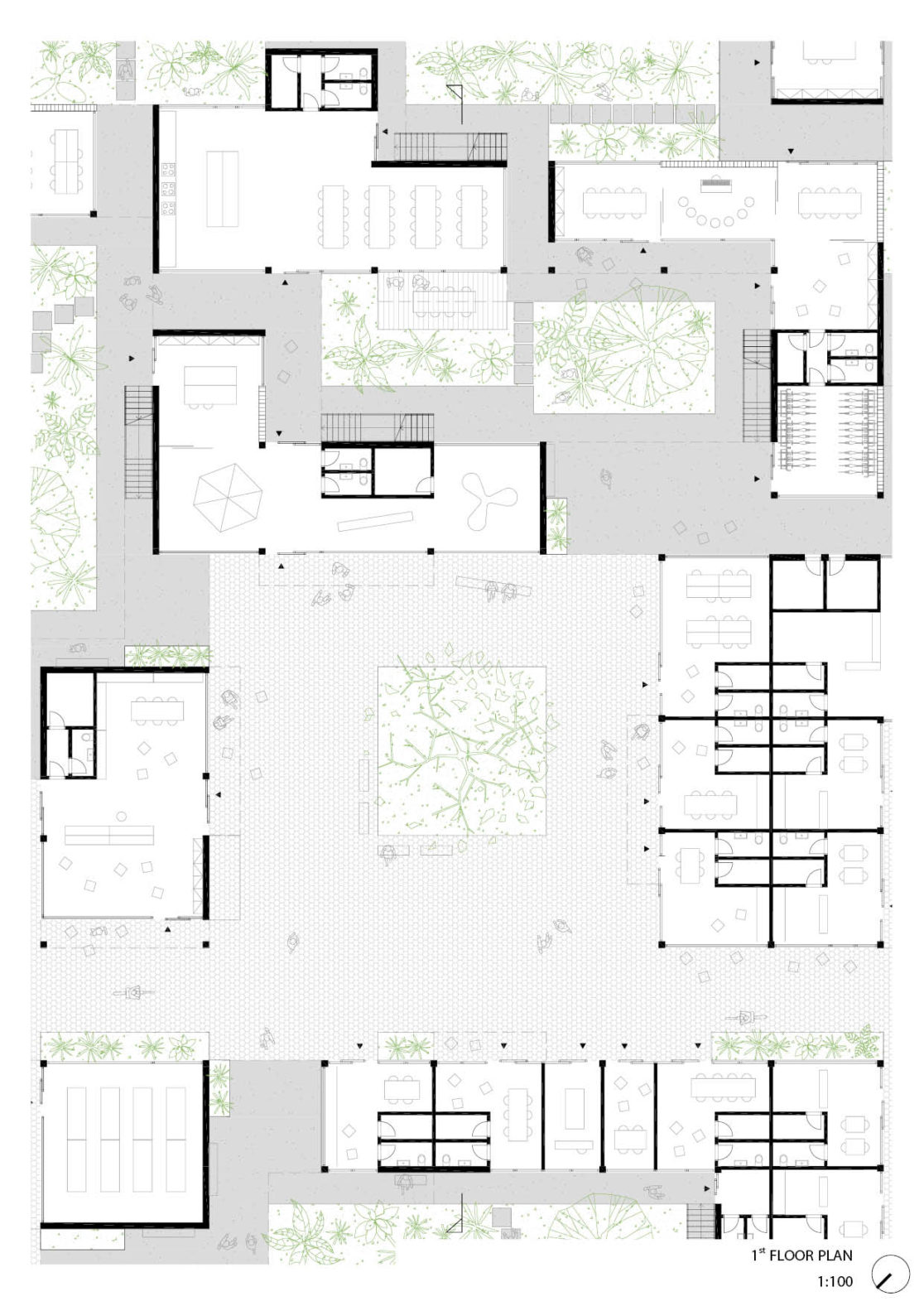 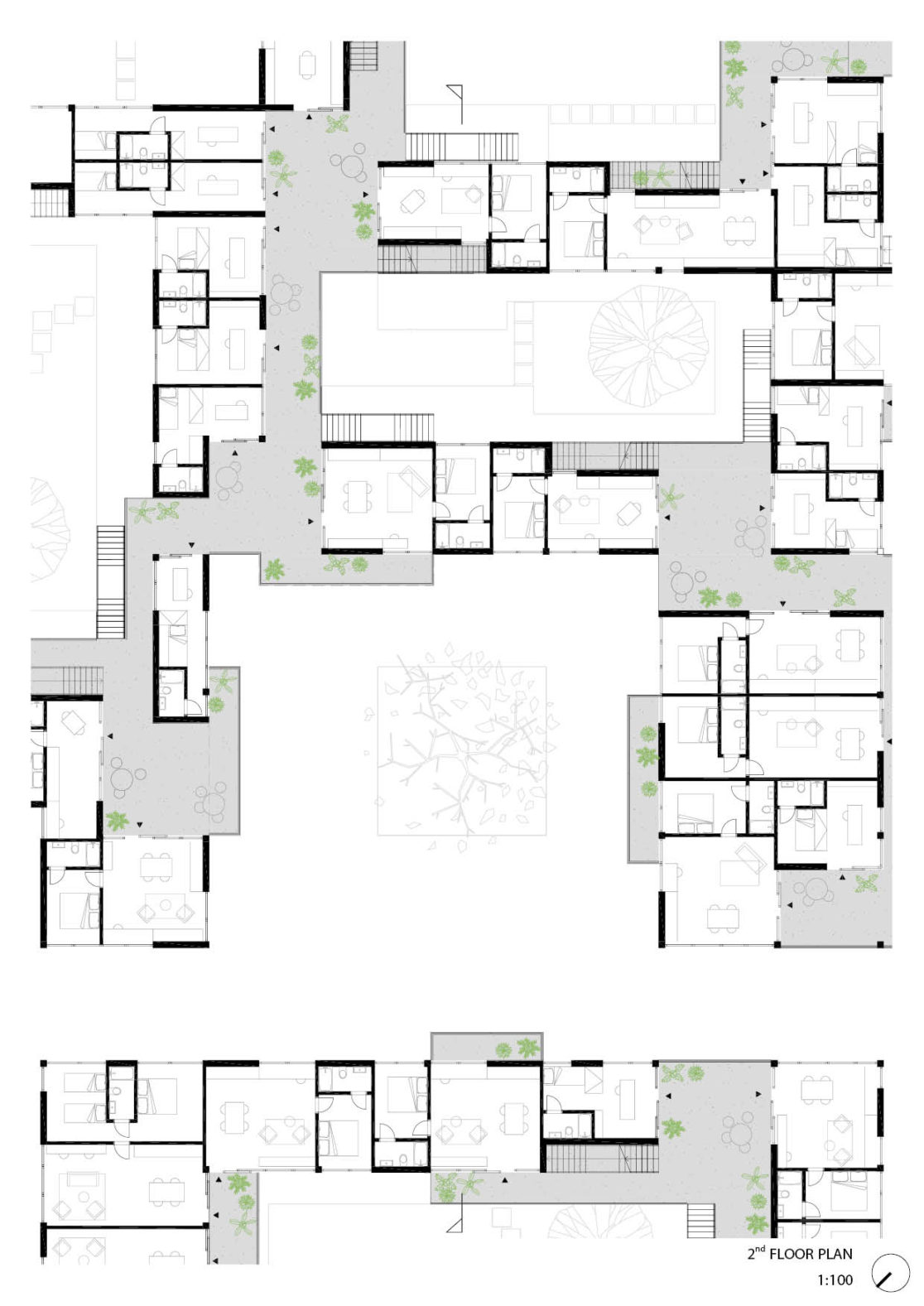